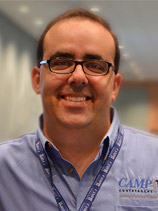 Dan is an active networker focused on making a difference in the professional lives of IT practitioners. He has built a win-win climate for CAMP’s attendees, speakers and sponsors.

Dan graduated from University of Wisconsin-Madison with a BBA in Marketing and is active in many local professional and community organizations.  While at the University of Wisconsin-Madison, Dan was Vice President of Marketing for Mu Kappa Tau, UW Madison’s Honorary Marketing Society. Prior to UW-Madison, Dan was very active in Junior Achievement, having been Vice President of Marketing for several years and winning a partial collegiate scholarship due to his accomplishments. Dan, and his wife, Jaimie, have two children and live in Chicago, Illinois.

To view Dan’s background and/or invite him to connect via LinkedIn, click below:

Julian Horwich founded CAMP IT Conferences, Inc in 1984. The organization’s goal is to provide assistance to corporate IT executives, management and staff in making strategic and tactical information technology business decisions. CAMP is in its 33rd year producing conferences, tradeshows, and seminars aimed at that goal.

Julian Horwich has been involved in information technology for 53 years. He initially was a systems engineer with RCA’s computer division, but much of his corporate career was in IT management and staff positions at pharmaceutical and health care companies. A major focus was computer technology for drug research applications.

Widely quoted in IT publications during the 1980s and 1990s, InfoWorld said of him in their March 16, 1992 issue: “Julian Horwich is literally a household name in the microcomputer management community”.

His academic background includes undergraduate study in electrical and biomedical engineering at Northwestern University, graduate study in computer science at the Illinois Institute of Technology and continuing education in a variety of technical and non-technical fields of study.

His interest in producing events began as an undergraduate with the student chapter of the AIEE-IRE (now IEEE). He also worked on event planning for the Chicago chapter of the Association for Computing Machinery (ACM). Julian Horwich organized the first international conference of the SAS Users Group International (SUGI) in 1976, drawing statisticians and computer professionals from seven countries.

In the 1970s and 1980s Julian Horwich was a member of several organizations involved with promoting socially responsible application of technology. He authored a handbook for the ACM’s Computer Ombudsman program, and was the first editor of the organization’s newsletter. Julian was also a member for a dozen years of the Northbrook Illinois Rotary Club.

His experience supporting business users with personal computing began in the 1960s using early timesharing terminals. In the 1970s and early 1980s, he spoke widely on the future of personal computing, e-mail, and app development. He has been a guest speaker at Northwestern University’s Kellogg School of Management and Lake Forest College, as well as many computer industry conferences.  He has authored several articles on pharmaceutical research computing, personal computing, and e-mail, and compiled the book “Pharmasources: A Directory of Software for Pharmaceutical Applications”.

Julian Horwich has programmed apps for mainframes, minicomputers, microcomputers, PDAs and cellphones. His first app was a payroll system written in Assembly language on the RCA 301 mainframe computer in 1965. He later programmed apps for pharmaceutical research. Starting in 1996, he developed several commercial personal productivity apps for cellphones and other handheld devices.

Julian, and his wife Evey, have two married sons and four grandchildren. They live in Highland Park, Illinois, a suburb of Chicago.

You can read more about Julian in Infoworld Magazine here.